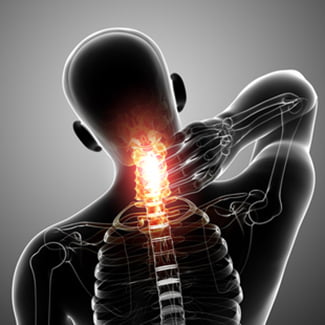 A cervical spine is extremely delicate and houses the spinal cord that sends messages from a person’s brain to control every aspect of their body. At the same time, it is also incredibly strong and flexible, allowing the neck to move in different directions. The cervical spine, or neck, consists of bones, nerves, muscles, ligaments, and tendons and has seven stacked bones, which is called vertebrae.

The top of the neck connects the cervical spine to a person’s skull while the bottom is what connects it to the upper back around the shoulder area.

A cervical spine performs many different roles, all of which are crucial. These roles include protecting the spinal cord, supporting a person’s head and its movements, and facilitating blood flow to the brain. It is amazing that so many nerves, blood vessels, and joints come together in such a small space and for this reason, the cervical spine is considered one of the most complicated areas in the human body. It is also the most mobile region of the spine that allows the head and neck to move in certain directions. Those motions normally involve one or more of the following types of movement of the cervical spine:

Certain movements can be done together and a combination is possible. For example, you can rotate your neck while flexing it forward at the same time.

The upper cervical spine is a very important part of the human body because much of our nervous system passes through it. If you have any concerns regarding your spine, contact Dundas Chiropractic today. You will work with the best chiropractors in the Oakville and Mississauga areas who specialize in spinal decompression, sciatica, and orthotics, so call now to book an appointment and start feeling better right away.